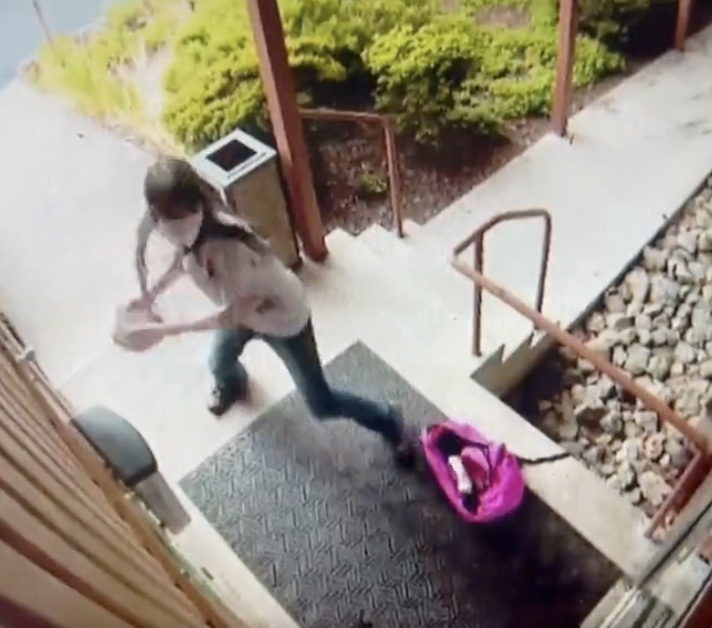 Moment crazed man, 31, smashes up door of Catholic church and sprays graffiti over the walls after Roe v. Wade was overturned
A man in Washington was arrested on Tuesday for vandalizing a Catholic church in Washington state and spraying graffiti all over its walls, less than a week after Roe v. Wade was overturned. Maeve Jacqueline Nota, 31, was recorded smashing one of two doors with a rock in front of a pastoral office at St. Louise Catholic Church in Bellevue before throwing and kicking broken glass into the building, according to surveillance footage. A woman was praying inside when the vandalism started. She tried to talk to Nota but, scared, ended up locking herself inside the building while he graffitied the wall outside the church.Nota was then seen in the surveillance video picking up his backpack and leaving the area after being chased off by a church employee, who had been hit by a rock thrown by the suspect. The employee was also spray-painted in the face. In the aftermath of the incident, one of the church's entrances was destroyed, while a door in the parish's schooling area was also smashed. Several spots within the church grounds were also graffitied with anti-Catholic rhetoric. 'Religion of hate,' 'go to your fake hell,' 'groomers,' 'rapists,' 'woman haters,' and a spray-painted message calling Catholics 'liars' were pictured on social media. Source